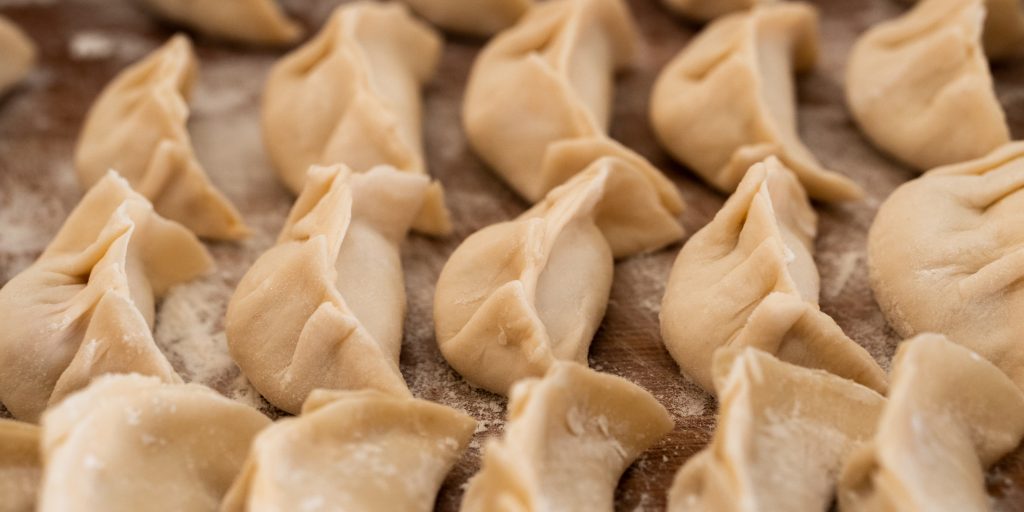 On a regular Wednesday afternoon, we arrived at Threefolds Cafe in South Miami. This time we weren’t there for the Monkey Bread. We were there to chat with Chef Evan Burgess and Chef Pedro Mederos who were prepping for the week’s E&P DMPLNGS run.

If you’ve been keeping up with Breaking at Breakfast and Where to Eat & Drink Next in Miami then it’s not the first time you’ve heard of E&P. We wanted to get to know who is behind this non-traditional dim sum pop-up. Who is making these delicious beef shank dumplings and pork belly bao? The guys killing it at fermentation and even making their own Yuzu Kosho, a Japanese condiment that most chefs would buy. But not E&P.

In our eyes, they are part of the next generation of great chefs in Miami. They’ve worked at some of the best restaurants in the nation including 3-Michelin star Singlethread in Sonoma and 1-Michelin star Boka in Chicago. The accolades are there. No doubt about it.

But what we love most about them is their dedication to every dish that comes out of the kitchen and the drive to push Miami’s culinary boundaries.

Before E&P DMPLNGS,  they were both sous-chefs at Alter in Miami. Because of COVID-19, they lost their jobs and after working for Miami’s pandemic-born pizza hit: Old Greg’s, they found themselves having dinner at Pedro’s house. 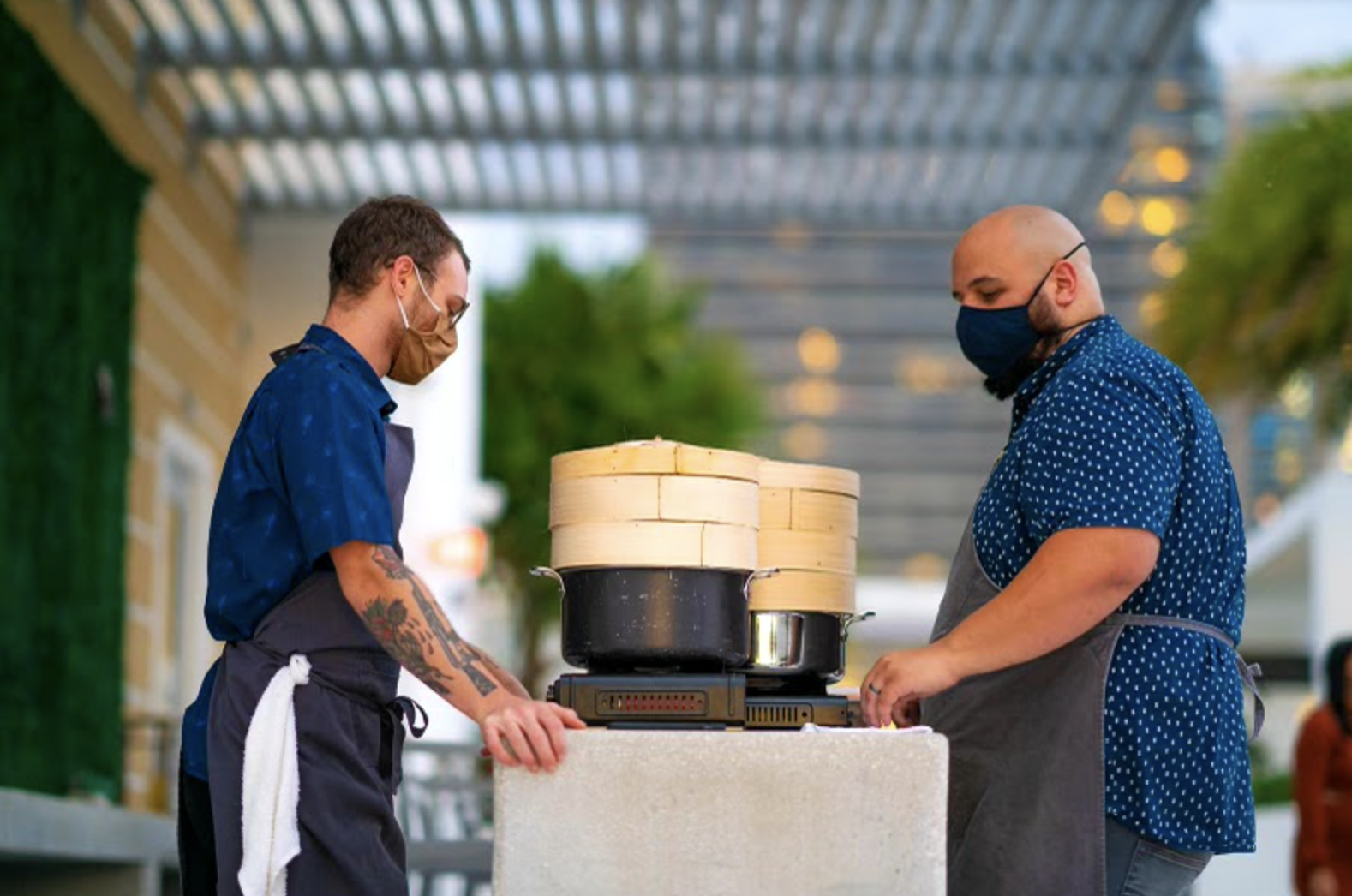 Pedro was making yakitori and Evan brought dumplings. Weeks later, they were opening up their pop-up concept. It all happened so fast. On their first night, just two hours before they could seat their guests, they finalized their insurance to operate.

“It came out of nowhere,” said Pedro. Except not really. Years of research, travel, and “trial by fire” had prepared them for this moment. They were making the food they loved to cook and eat.

The ambiance is that there is no ambiance. They could be cooking anywhere and the food would speak for itself. They don’t even have Kendrick Lamar or Run the Jewels playing outside. Sure, they’ve thought about getting a speaker but that’s not their focus right now. They want to shoot the shit with you like if they were welcoming you into their homes.

Gustavo will top off your glass with Tete Red in the most hospitable way, Evan will explain how to properly eat a soup dumpling while Pedro hovers over you and waits until you take that first bite. That’s the ambiance. 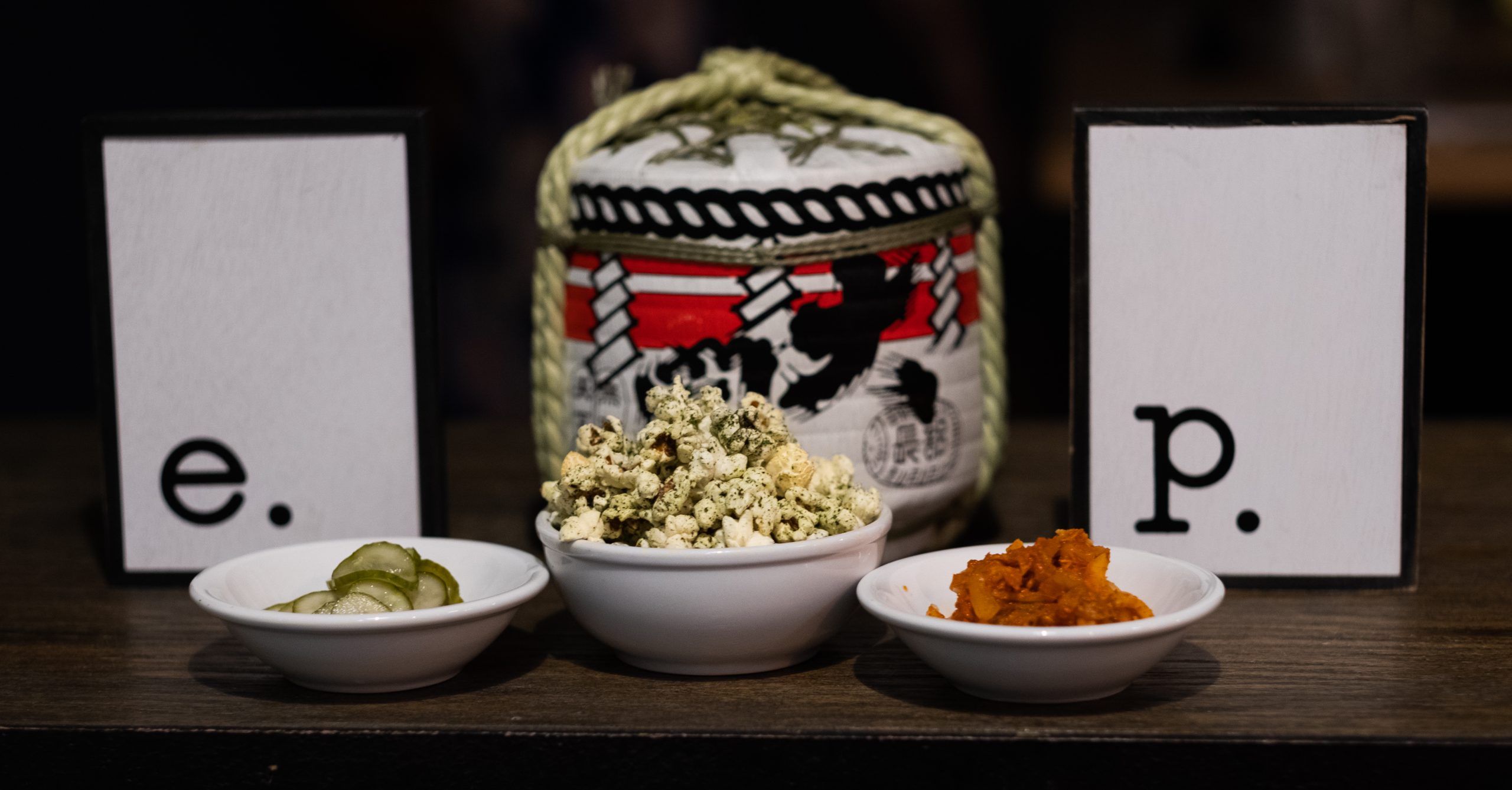 Their story isn’t an episode from Chef’s Table, as Evan puts it. They didn’t know they wanted to cook at an early age but once they were in the kitchen, they knew they belonged. Pedro explained that the appeal stemmed from knowing that every day he could be better. This is their philosophy, it’s at the core of everything they do. 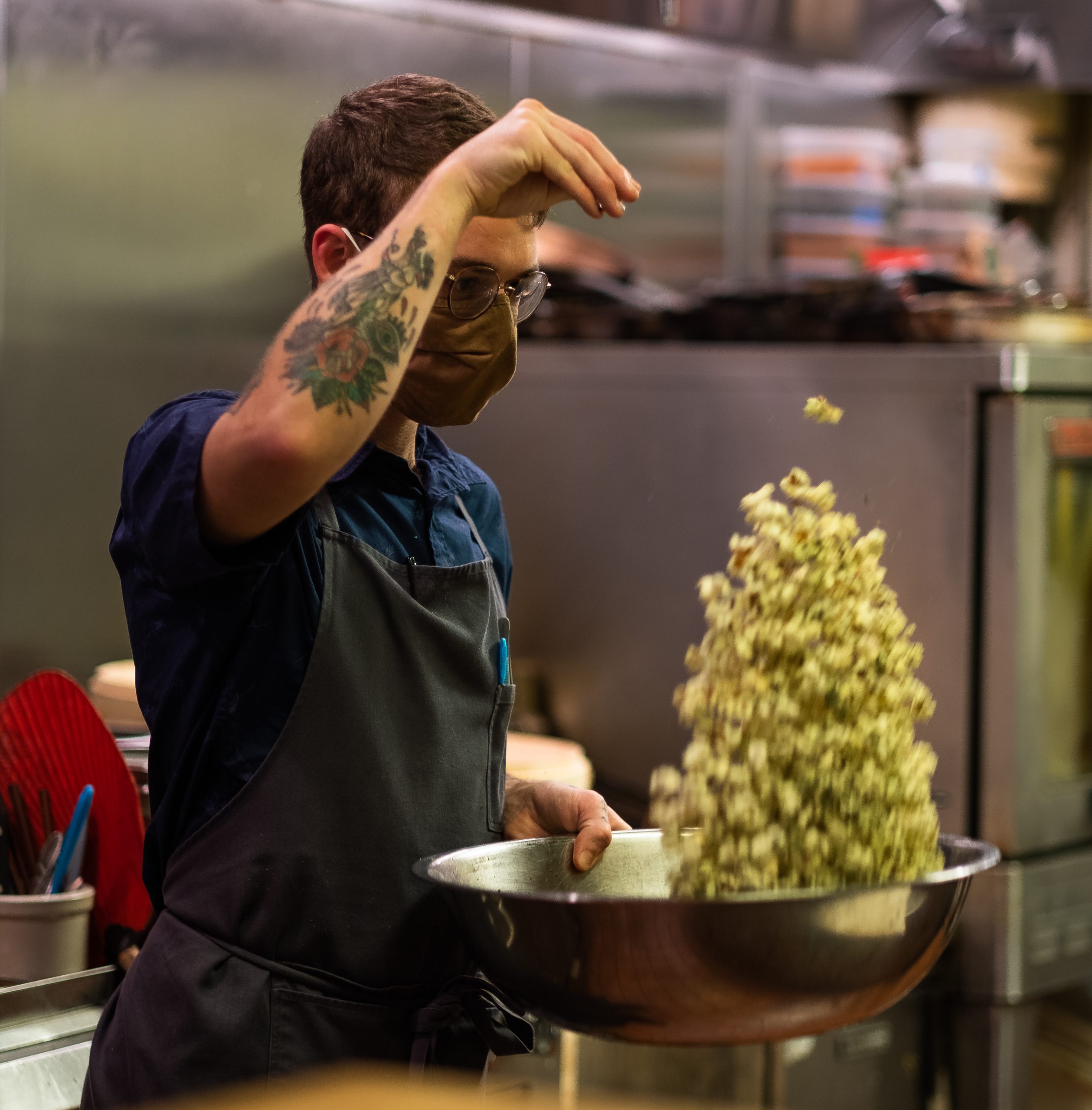 Their menu does not offer traditional dim sum. They are not making Cantonese dumplings. Their cooking represents the knowledge they’ve acquired while traveling to China, Japan and working in Japanese restaurants.

They are honoring the ingredients and products they love most from Vietnam, Japan, Thailand and Korea in an Evan & Pedro way. They believe that Asian flavors are some of the best in the “fucking” world and their appreciation is evident in their commitment to the process. That is more important than the dish itself. No short cuts in this kitchen even if the flavors are similar.

For example, on their menu, they have a Black Sesame Miso Ice Cream. They could easily make the ice cream with black sesame paste and white miso and it would taste pretty much the same as making their own amino paste with black sesame. But they choose not to because they respect the process. If they’re going to do something, they will do it the right way.

Technique, consideration, intentionality, and caring is how they start the conversation. It’s ultimately about getting others to think about the reasoning and intent behind every dish. If it’s on their menu then that means they’ve tested the dish 100 times with different variations until they are satisfied.

So although it’s about the process, the dishes that made it on the menu are truly delicious. Every week E&P make edits to enhance the flavors of their food.

They keep their offerings short, which we appreciate because it means they are invested in all the details that make up their dim sum. 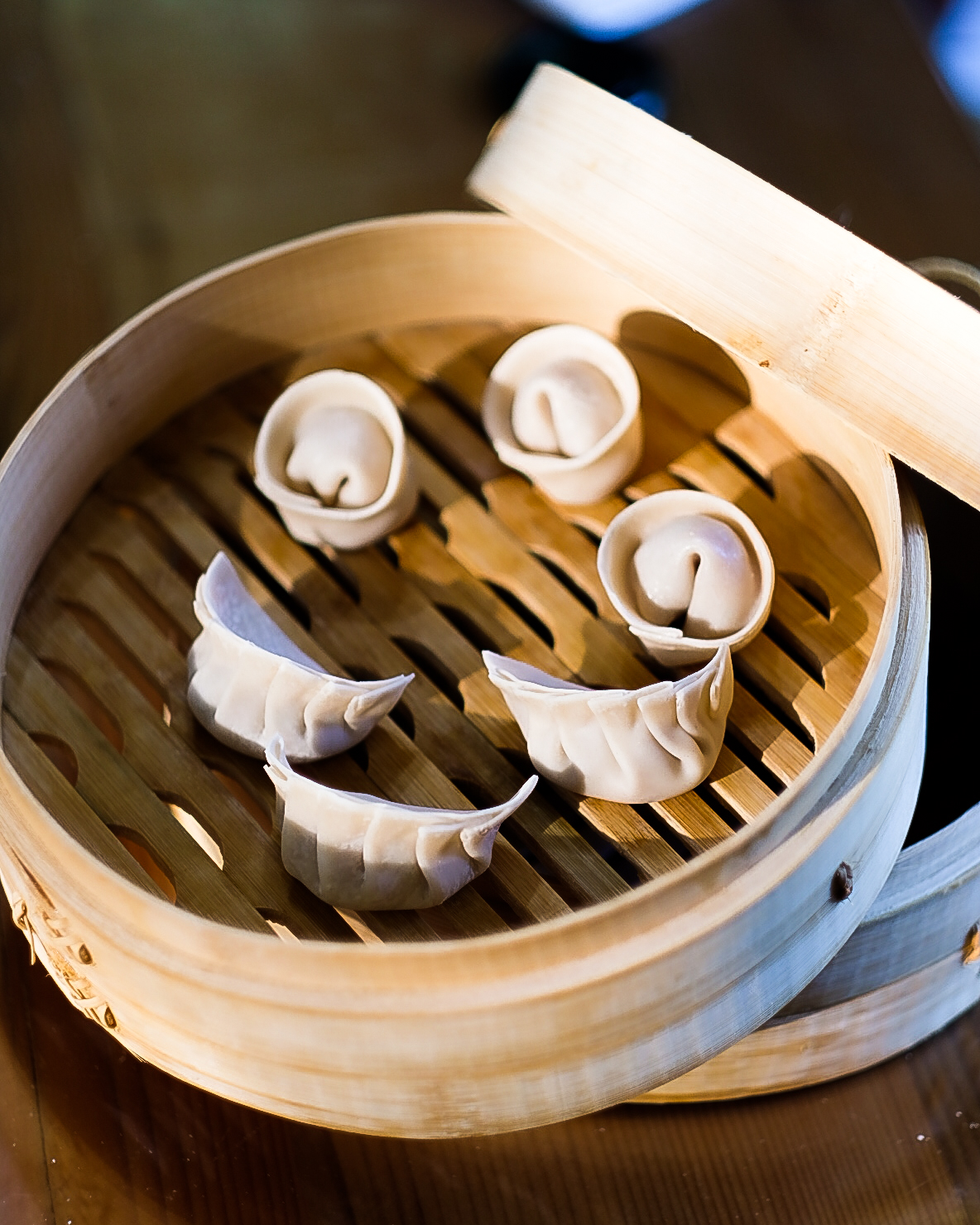 To break down the level of craft that goes into rolling and portioning each one, let’s talk about the process.

Evan makes 360 of just the lamb dumplings in a week. He emulsifies the fat into the Lamb Dumpling, creates 6 to 7 different crimps to seal them and then re-shapes them into a half-moon. The dipping sauce has black vinegar, oyster sauce, ginger, honey and double fermented soy sauce.

The Beef Shank Dumpling has onions, carrots, lemongrass, garlic, and is braised with red wine. They also add beef garum, a fermented animo sauce, before the dumplings go into the steamer. They are served with a demi glacé vinegar.

The Wings are really special, seasoned with furikake (toasted sesame seeds, nori, salt, sugar) and glazed with tare (a thick and sweet soy sauce) for a nice caramelization. First, they brine the wings and then they par-cook them so the texture is on point. After that, they grill them on the konro, a Japanese barbecue over binchotan charcoal used in Japanese cooking. Their take on a “buffalo sauce” consists of Gochujang (a fermented Korean chili paste), butter, liquid shio Koji (Japanese condiment made out of fermented rice Koji).

The Pork Belly Bao has crispy garlic, banh mi pickles, and culantro, a herb similar to cilantro wrapped in a locally-sourced shiso leaf from Harpke Family Farms. Please eat the shiso, it’s there for a reason and balances out the flavors of the pork belly.

Outdoor seating is available. If you’re not dining out yet, you can also order for takeout HERE. 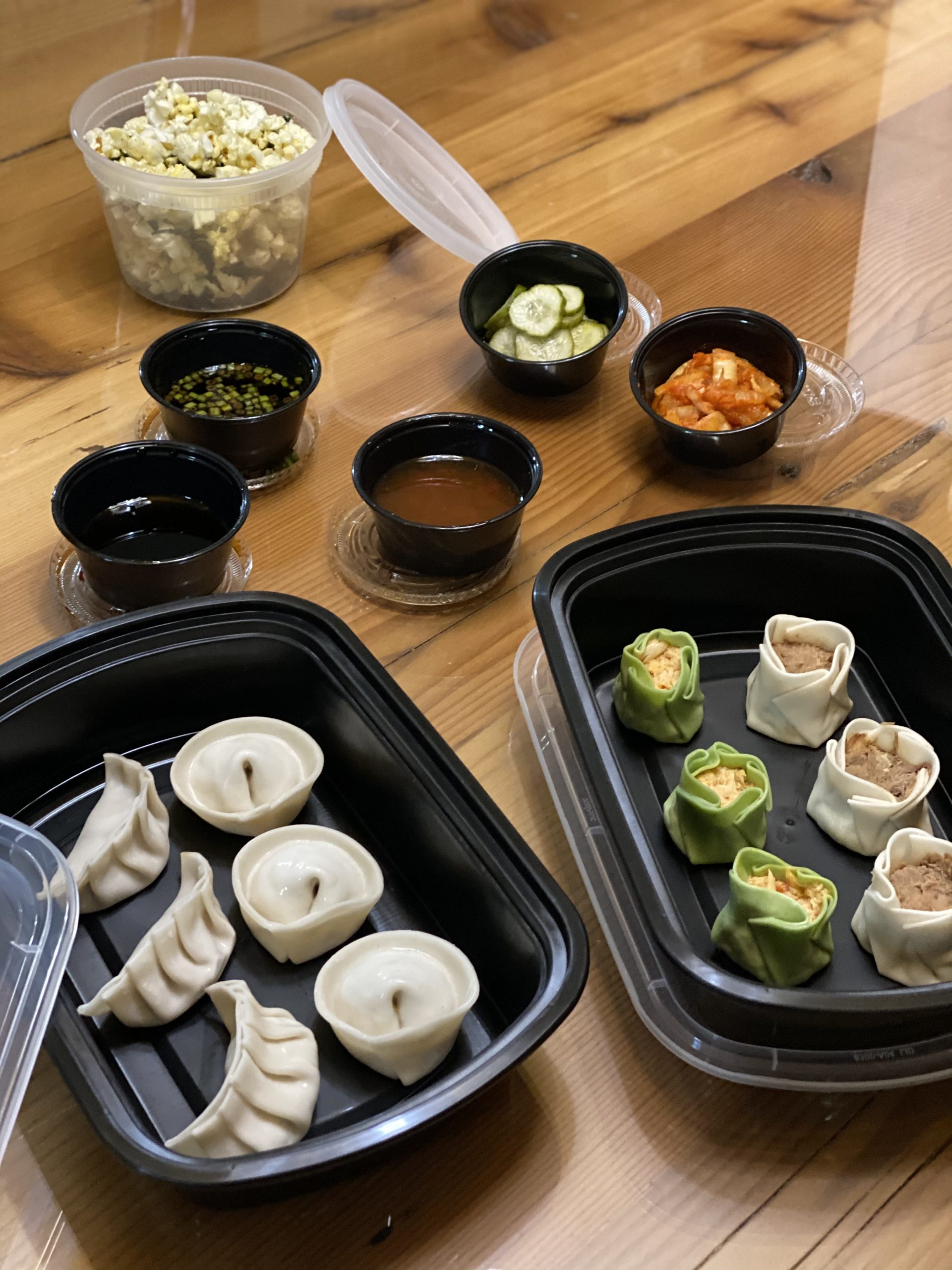 E&P DMPLNGS provides disposable paper menus. Their team wears masks and customers are also required to wear masks when they get up from their table.

Until March 27th, non-traditional dim sum is what E&P are serving. After that, their pop up will conclude and they will move on to what’s next.

Pedro says he feels bad for people that haven’t come in. Those waking up on March 28th and thinking,” let’s go to that dumpling pop-up.” – it sucks to be you. 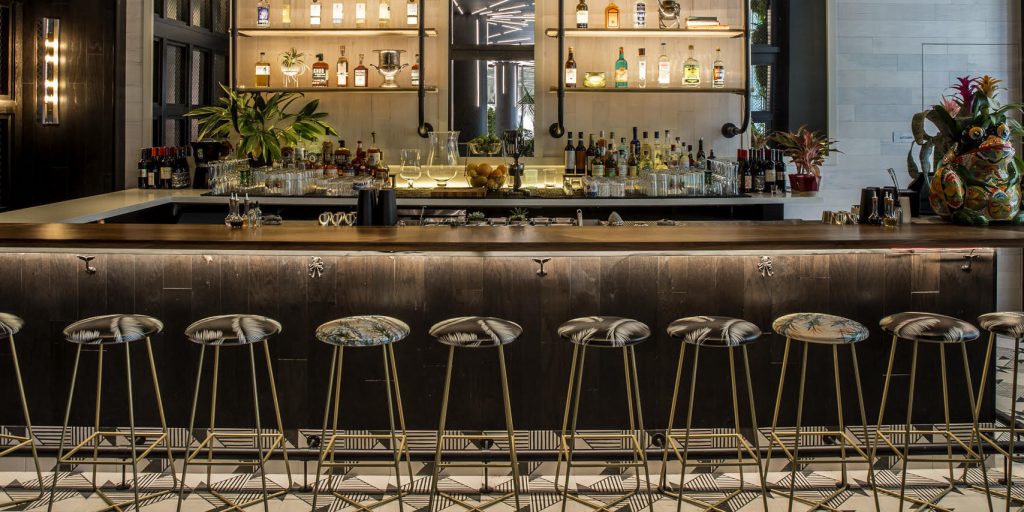 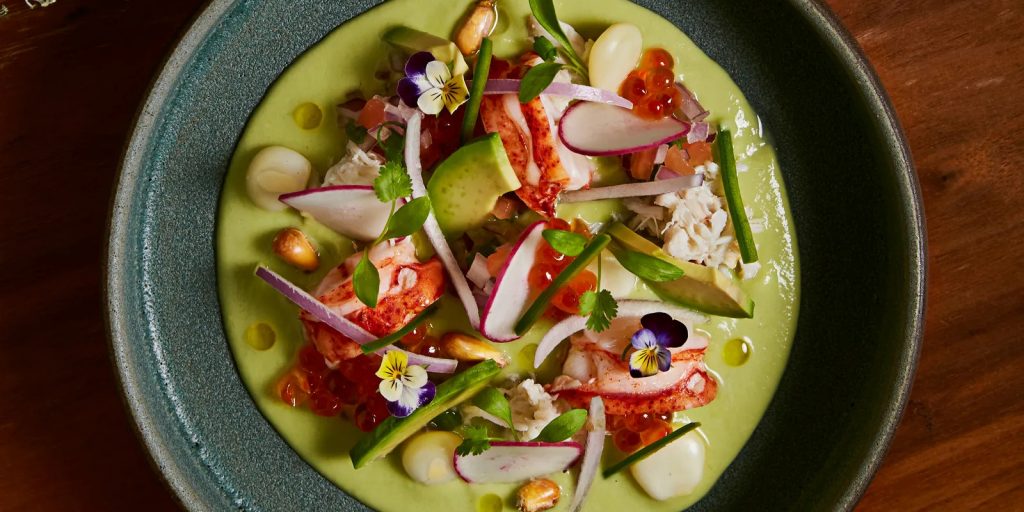 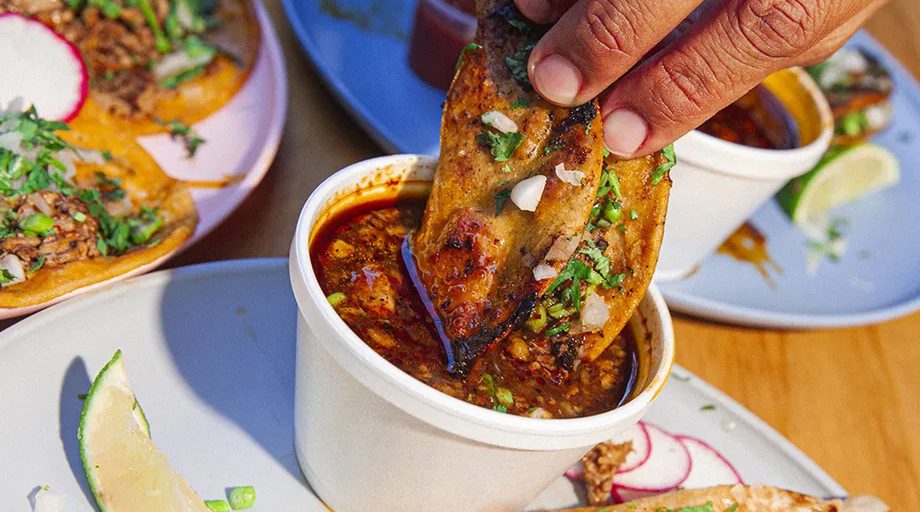 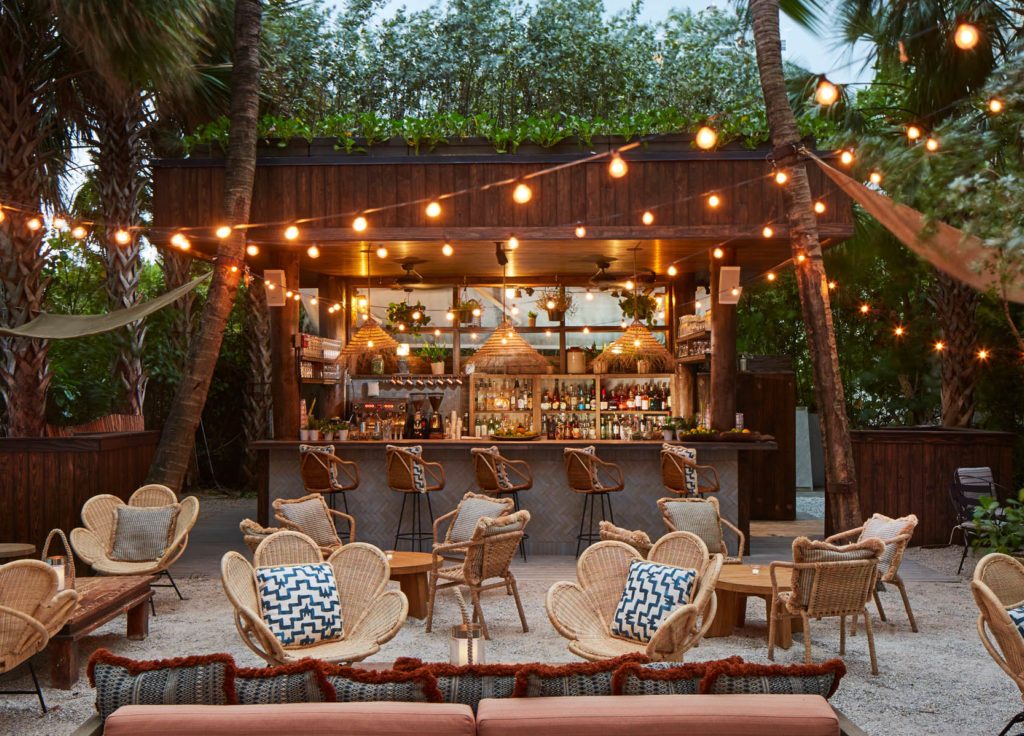 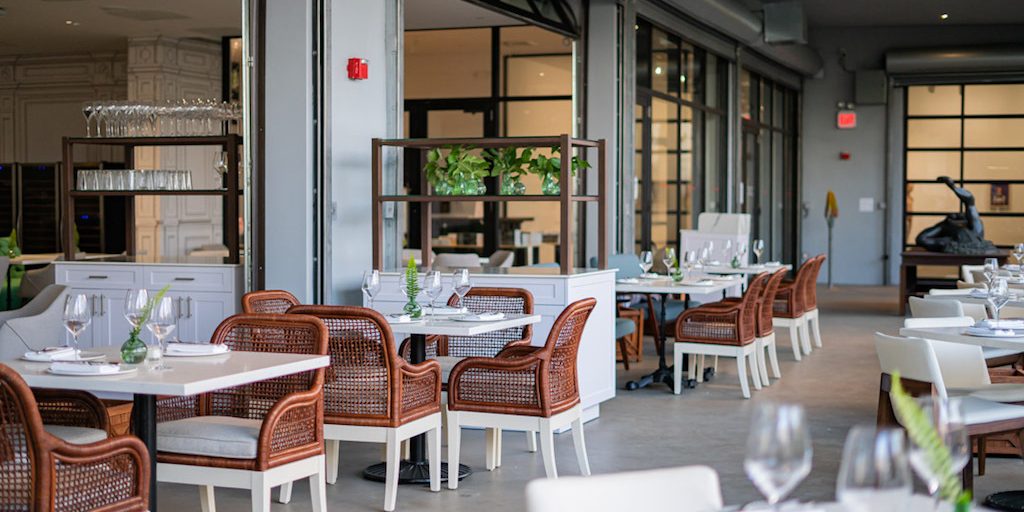 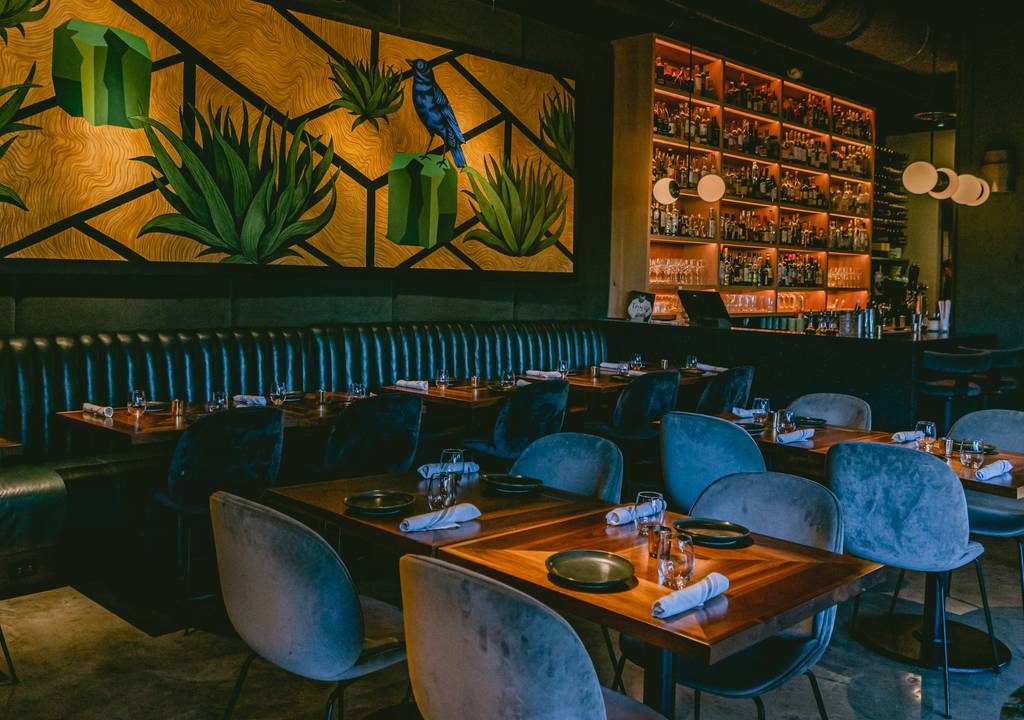 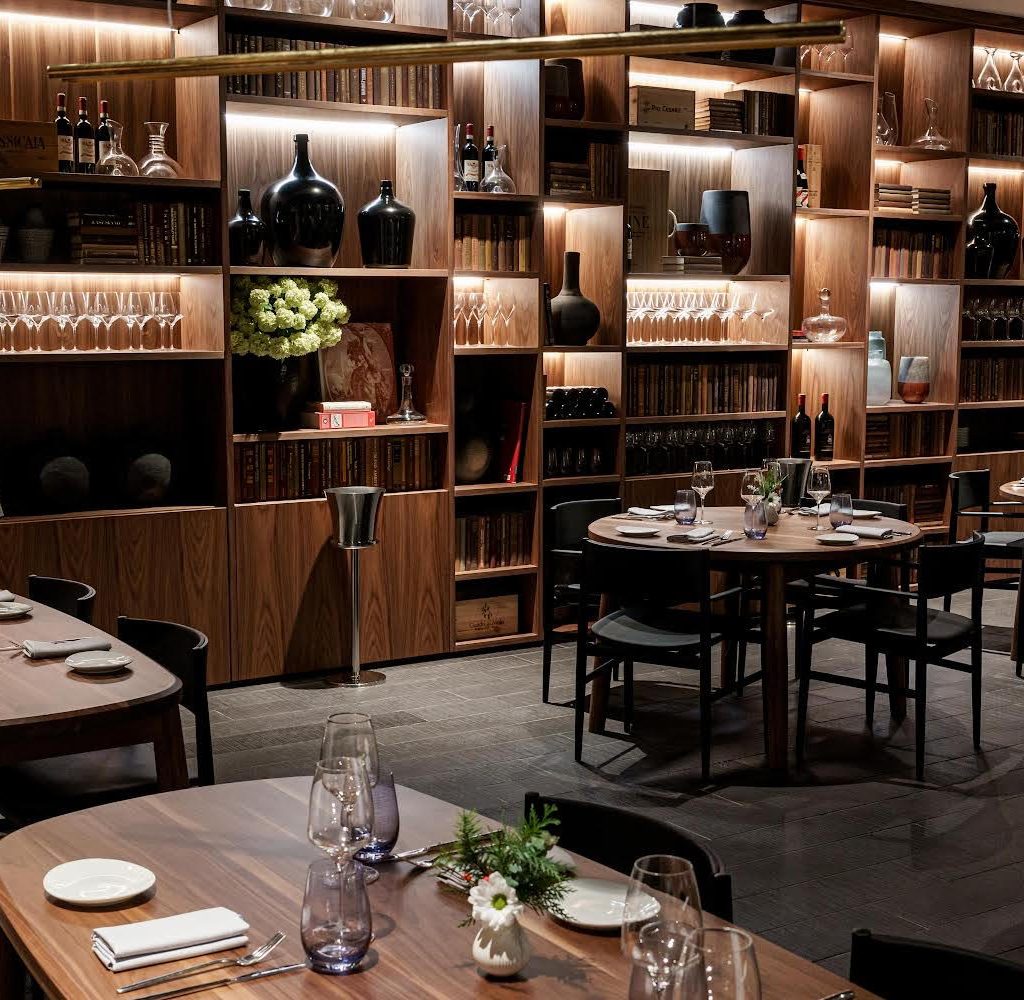 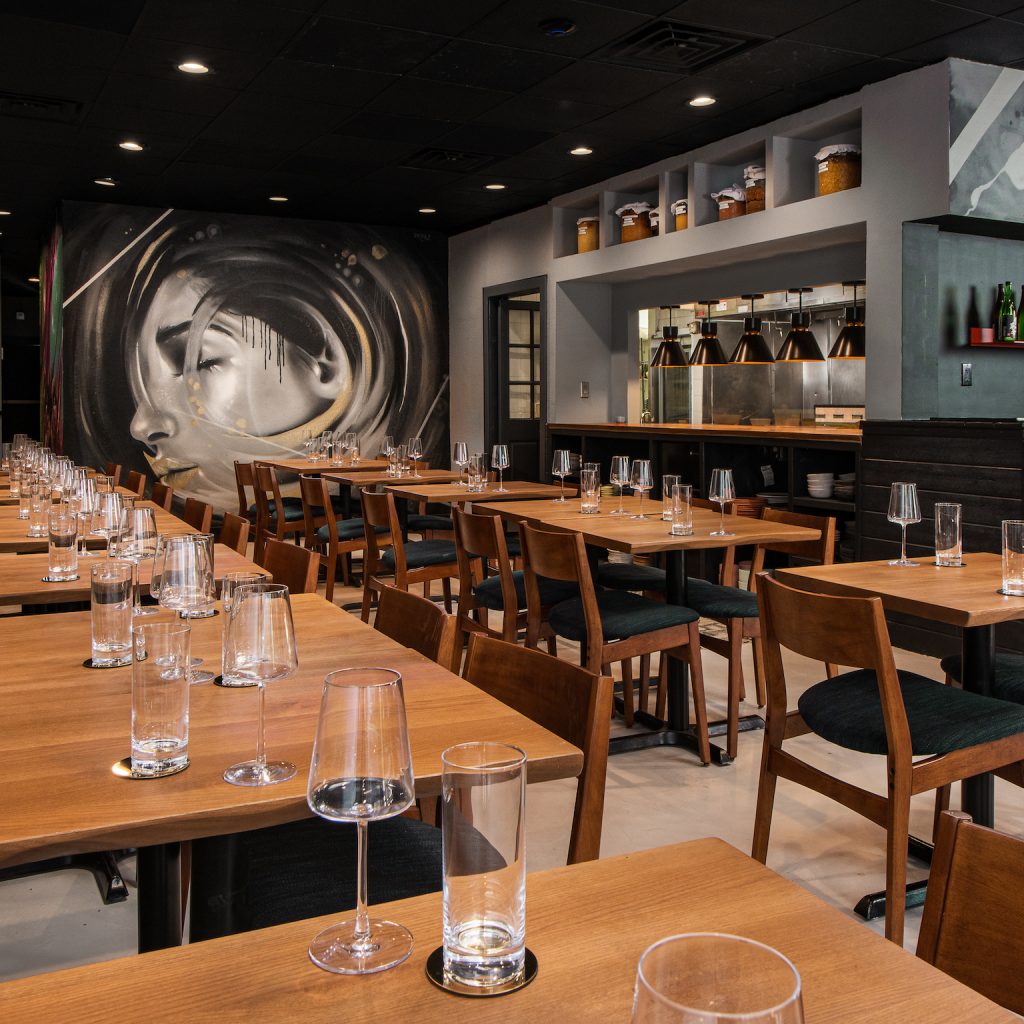